“Something about restricting myself and not eating felt good. It felt right.” Tabitha Farrar’s words in her mesmerizing eating disoder memoir stunned me.

I had often felt that way when I was suffering, like I was exercising some righteous degree of control by religiously restricting what I ate (if I let myself eat anything at all). I don’t know why or how exactly it happened, but something re-wired my brain to think eating “bad foods” (junk food, fried food, fattening food) made me bad and deserving of punishment. This eventually grew from just “bad foods” to “too much food” to “any food before lunch” to a whole list of ridiculously stupid rules, much like Farrar enforced stringently on herself for the twelve torturous years she suffered with an eating disorder.

[…] hers is a voice of someone who “gets it,” who understands the reasons people restrict their eating and their eventual loss of ability to control their restrictions.

Farrar’s story is captivating and enlightening and, I believe, could help many people struggling with an eating disorder because hers is a voice of someone who “gets it,” who understands the reasons people restrict their eating and their eventual loss of ability to control their restrictions. I, personally, did not suffer as much with pure Anorexia as Farrar did (I stupidly chose, instead, to become a skilled glutton and bulimic), but I was empowered all the same by hearing her explain her mental struggle in much the same way mine felt.

Farrar even named her inner voices (the mind demons that constantly screamed at her to “eat!” “not eat!” “eat some more!”) Sister Catherine and Succubus, to which many people struggling with an eating disorder can relate as these voices are constant. We live with them, we talk to them, we argue with them, and we often eventually cave to them. Farrar truly captured exactly what it feels like to suffer everyday with an eating disorder and how pervasive the illness can become. It keeps us from not only eating but socializing, engaging, and connecting with others to a point that when we need help the most, we are the most unable to reach out for it.

Farrar’s honest account can hopefully help those who want to help a friend or loved one who is suffering with an eating disorder finally understand.

Her recovery is equally heartbreaking and empowering. Farrar’s recount of the tears and shakes she suffered through in order to simply make herself eat a meal demonstrate how real the struggle truly is. For those who ask us, “Why don’t you just eat?” and leave it at that, Farrar’s honest account can hopefully help those who want to help a friend or loved one who is suffering with an eating disorder finally understand. It’s just not that simple. And, it never will be. But, we can get better. Through disciplined mental rewiring (Farrar’s use of meditative yoga in this regard is very inspiring), forgiveness, and patience.

Tabitha, thank you for sharing your tragic but triumphant story with the world. Had I read it sooner, I believe I would have suffered fewer years. Yet, reading it after I have written my own story only solidified what I thought might be true: that there are so many of us suffering with the same mental demons screaming the same horrible things at us, but we all can quiet them. We all are strong enough to overcome and eventually learn, as you did, Tabitha, to reacquaint with our inner child appetite and once again love fat.

Callie is bold. She is also healed and inspired to help others kick the shit out of this disease, just as she did. She is you and she is also me. Callie is the name I published under as she was brave and bold enough to tell this story, to put it out there to reach and impact others. While I was not ready to become—to the rest of my professional and public world—the new face of bulimia, Callie was. And I will be forever grateful. She truly feels like a person of my past. Someone I abused and tormented for years, but she, being me, is also strong and resilient and has forgiven me. View all posts by callie.bowld 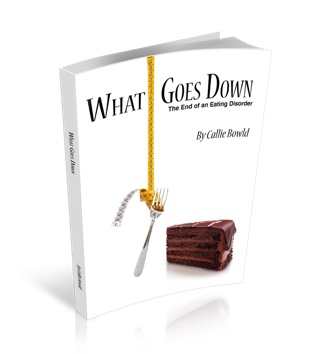